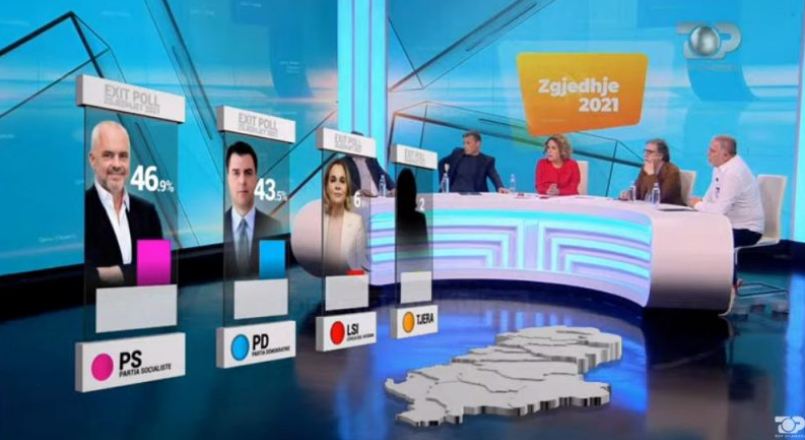 Top Channel has broadcasted the results of its election Exit Poll conducted by today the Albanian Post company.

Top Channel has broadcasted the results of its election Exit Poll conducted by today the Albanian Post company.

The separate result for the districts, show that in the capital Tirana the battle for the division of seats between the Socialist Party and the Democratic Party i will be a race until the last moment.

The Socialist Party and the Democratic Party seem to share 17 seats, while the Socialist Movement for Integration gets 2 seats. SP wins 44.6% of the vote, while PD 46.4% of the vote.

In the district of Vlora it turns out that the SP retains its stronghold seemingly winning 8 seats, the DP gets 4 seats while the SMI does not get any seats. Vlora is considered a problematic region as President Ilir Meta has repeatedly said that there was provocations by Edi Rama and Damian Gjiknuri of the SP.

In the district of Korça, it seems that the battle has been closed equally between SP and PD, which receive each 5 mandates. SMI gets only 1 mandate.

The result in Lezha; The Democratic Party wins 4 seats while the Socialist Party 3 seats, according to Exit Poll. DP wins 54.5% of the vote, while SP 35.2%.

In the district of Shkodra it turns out that PD gets the victory with 6 seats, SP gets 4 seats and LSI gets 1 seat. Journalist Baton Haxhiu informed that inthe race is also PSD led by Tom Doshi, who can secure 1 mandate.

The result in Fier; The data show that 52.3% of the citizens voted for the Socialist Party, giving them 9 seats, while the Democratic Party gets 6 seats from 37.3% of the votes, and the SMI gets 1 seats from 7% of the voters.

In Debar The Democratic Party wins 3 seats, according to Top Channel’s Exit Poll. DP wins with 53%, translated into 3 seats while SP with 36.8% gets 2 seats. SMI wins a predicted 6.4% of the vote, but no seat.

Berat, the SP gets 4 seats after 50.4% of citizens voted for the left. DP gets 2 seats while the SMI seems to have lost voters as they only 13% voted it, enough for one mandate.

Out of 14 seats in the Durrës district, according to Top Channel’s Exit Poll, the Socialist Party receives 8 deputies or 52.6% of the vote. The Democratic Party won 42.9% of the vote, which translates into 6 seats. Socialist Movement for Integration 3.0% of the vote.

Possible options on dismissal of the president; Constitution Court may address the Venice Commission

Fier, two electricians die from collapse of out of date high voltage pole in Roskovec