Elections 2021 update/ SP in the lead, counting closed in some municipalities 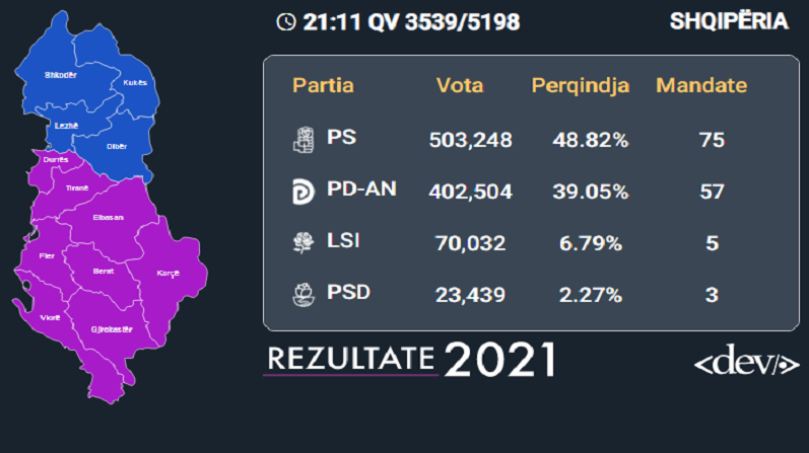 Vote counting process for the April 25, 2021 parliamentary elections is still ongoing across the country. The counting continues smoothly, except for some debates created between the commissioners on the issue of stoppage and resumption of work.

The SP has secured 75 seats so far, followed by the DP with 57, SMI 5 seats and PSD 3 seats. So far, the socialists lead in 8 regions, while the result is unclear in Debar.

In the regions of Shkodra, Kukes, Lezha and Dibra the Democratic Party leads, while in all other regions the Socialist Party is in the lead.

Chief Commissioner, Ilirjan Celibashi in a statement for the media, said today that the result will be released within 48 hours, while in voting unit no.

10 in Tirana, the only one that conducted electronic counting, the SP leads with 6007 votes.

In other developments, chairman of Social Democratic Party, Tom Doshi has chosen to resign from the mandate of the deputy, saying that this resignation is irrevocable, without giving any argument today.

Doshi was one of the names considered inappropriate by important international observers in Albania.