Nature reserves and protected areas in Albania are currently managed by the National Agency of Protected Areas, whose main task is to prevent or eliminate activities that damage them.

In one instance, the agency made the drastic decision to remove the quarries from Tomorri Mountain, after a government decision declared the area a National Park.

But before 2013, permits were issued for hydropower construction, some of which in protected areas such as Shebenik Jablanica, one of the largest national parks, covering an area of about 34,000 hectares. An HPP in the area has damaged the nature, but also the flow of aquatic life, among other things.

“I am here between the village of Dragostunj and Hotolisht in the town of Librazhd, where in 2009 was granted a permit to build a hydropower plant, which is the one you see behind me. The permit was granted for a protected area, in which the river water was diverted in pipes and concrete barriers were built on its bed”, states Top Channel’s Andi Bora.

The construction company Energy Development Group says on its official website that the project starts at an altitude of 1,200 meters and the total energy production capacity is 9.6 Mw. This hydropower plant, built in a protected area, has a length of 10.5 kilometers of pipes where water is collected.

The fact that this HPP was built in a protected area is also confirmed by the official map showing that the 1,200 meters altitude where its construction began, is located on the surface of Shebenik Jablanica National Park. Where once this river, now driven into pipes, joined the greater flow of the Shkumbini river, there is now this door, which prevents looking at the sight of the environmental disaster caused by the construction of the HPP. 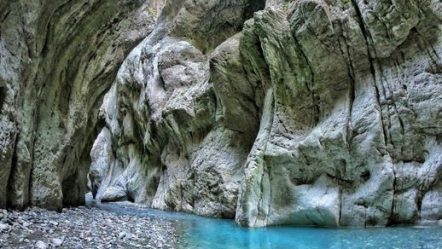