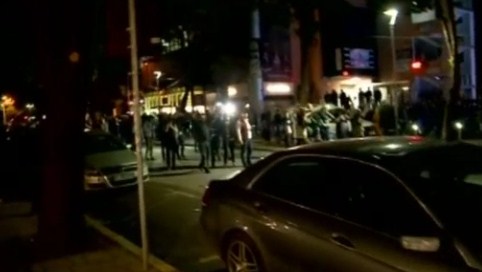 The Democratic Party leader, Lulzim Basha, spoke at the beginning of today’s protest organized by the opposition.

His message to Edi Rama was: “We will not let you block our path towards Europe”.

“This is the popular parliament. Welcome to the parliament of the sovereign, the people. We are here today under one mission, one purpose: to not allow an Albania of crime and corruption, which Edi Rama made for us”, Basha declared.

After some confrontations with the police at the PM’s Office, the protesters, led by the opposition leaders, moved to the Parliament’s building, where they threw fireworks and solid objects. The police responded with tear gas. Some of the protesters attacked even Top Channel’s crew and tried to destroy the equipment. Another Top Channel cameraman was attacked and sent to the hospital with minor injuries.

During this confrontation, the Police took the Organizational Secretary of the Democratic Party, Sait Dollapi, under custody. The other members of the opposition led the crowd to the Police Directory, where they tried to get inside.

A confrontation ensued with the Police, which responded with water cannons and tear-gas. Other leading members of the DP gathered in front of the building, asking the Police to release Dollapi, and accusing them of using violence against him.

The President of Albania, Ilir Meta, stated that Dollapi should have been taken to the hospital, not to the Police.

Rudina Hajdari, daughter of the deceased Azem Hajdari, one of the founders of the Democratic Party, condemned the violence against institutions. She declared that her father fought for democracy, not for violence.

The US and British embassies have issued statements condemning the violence.

The OSCE representation also issued a more direct declaration: “The organizers of this evening’s protest must bear the political responsibility for the criminal violence by some of their followers. Our thoughts are with the families of the injured. The OSCE will continue to encourage the effective opposition and dialogue in Albania, but it condemns totally those who try to use violence as a political shortcut; they will fail”, the OSCE declared.

The Democratic Party’s leader, Lulzim Basha, took the crowd at midnight, when their protest permit expired, to their party’s building, where he closed the protest and announced that the government had just declared war to the people.

The Police took Sait Dollapi to the hospital, for check-ups, while the building remains heavily guarded.

The opposition held an urgent meeting and decided to organize another national protest on Monday, 19:00. 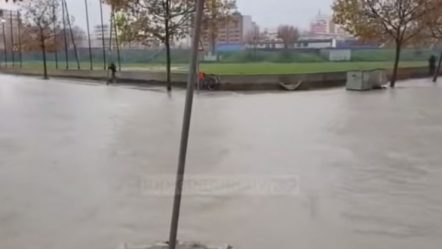